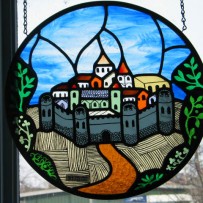 When I was a kid growing up in Brooklyn, I got introduced to 12th and 13th century stained glass in a Museum called The Cloisters, a branch of New York’s Metropolitan Museum of Art. It was wonderful to see the bright colors, the ancient materials, the whiff of history, the stories told by the glass. I was young, and I wanted to see the world in such a simple, idealistic, maybe even naive way. After I took up stained glass myself in 1969, I build my first kiln so I could duplicate the black trace paint which was fired onto the glass in medieval times. It is this which gives the detail between the lead lines, and I’ve used here in this panel a number of early French and English mannerisms, the orderly fields, the trees like broccoli, the perfect neat order of houses within the walls. It is my own design, and I drew it from pure imagination.

Now, for the story. A young woman walked into my shop a number of years ago and looked at this medallion. “I know this place,” she said. “My mother was born there.” And she named a village in the south of France. I told her I hadn’t drawn it that way, had never been there, but she told me I had got it just right. I just smiled and sold the piece to her and made a promise to go there one day. And I did, eventually.

One day a year or two later an older man born in Germany came in and looked at a panel made from the same design. “I know this place,” he said, naming a town on the Rhine River famous for its castle. But I told him it wasn’t, had not been, my idea to draw that. He was not convinced. And he was followed by an Italian fellow, who located the town in Sicily. And lately it was identified by a well-travelled American who knows exactly where it is, somewhere in Spain. I think I figured it out, finally. I think it is just an icon, a kind of an image of serenity and order and peace, of everything in its place and the colors bright and joyous. It is, maybe, just a place familiar to the heart.